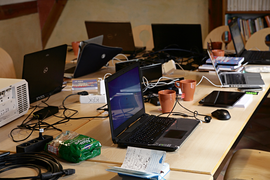 Due to corona pandemic: Neisse film festival has to reschedule

Dear fans of film and festival friends,
Due to the ongoing Corona pandemic, the 17th Neisse Film Festival will unfortunately not be able to take place in May as planned.
We have made this decision together with our partners and sponsors.
The trinational cooperation reaching across the borders is the heart of our festival. The organisation of the festival program, with over 20 venues in three countries, is a challenge even under normal conditions.

With the extensive restrictions on public life that have come with the spread of the Corona virus, the closed cinemas, closed national borders between our three countries, and an uncertainty with regard to the coming developments over the next weeks, a solid, reliable festival preparation is no longer possible, meaning the festival itself cannot be carried out as planned. We are very sorry to make this decision. But the health of our team and of our guests takes priority!

The 17th Neisse Film Festival should not be completely canceled, however. New Date: 24.–27.09.2020
Visit us online for the most current information on this: www.neissefilmfestival.net.

Here on our website you can find programs of past years for reference and inspiration.

With the title "Films for Future", the focus series of the 17th Neisse Film Festival is taking a look at both global and local topics such as the depletion of resources, environmental pollution, manmade phenomena such as climate change and structure changes; the environmental and ecological movements in the GDR and a topic receiving considerable attention currently, namely the phaseout of brown coal mining. This topic is especially controversial in Lusatia, the region in which the film festival is also located. This selection of films will be accompanied by a podium discussion on the focus topic, exhibitions and a concert with Dota Kehr.

Other highlights of the festival program - in addition to the over 100 films - include the opening ceremony in the Gerhard Hauptmann Theater Zittau on May 12 with a concert from "Felix Shinder & Dengi Vpered" with their mix of klezmer music and well-known "racketeer songs" from their hometown of Odessa, or the traditional festival party in Grosshennersdorf on May 16 featuring the Polish band "Tygroo" in the Kunstbauerkino. The Awards Ceremony will take place on May 16 at the municipal arts and leisure center (Dom Kultury) in Zgorzelec. In addition to the best feature film, best documentary, best short film and the audience favorites, awards will also be granted for best acting, best screenplay, and best production design, for example. A special award will also be given to one film chosen, from among all the festival films, for its particular dedication to the understanding between the neighbors Germany, Poland and the Czech Republic.